Three days before President Trump announced him as the new National Security Advisor, deranged mutant death walrus John Bolton appeared on Radio Free Asia and said of negotiations with North Korea, “I think we should insist that if this meeting is going to take place, it will be similar to discussions we had with Libya 13 or 14 years ago.”

Bolton has been loudly and publicly advocating “the Libya model” with the DPRK ever since.

“I think we’re looking at the Libya model of 2003, 2004,” Bolton said on Face the Nation last month, and said the same on Fox News Sunday in case anyone failed to get the message.
Bolton never bothered to refine his message by saying, for example, “Without the part where we betray and invade them and get their leader mutilated to death in the streets.” He just said they’re doing Libya again.

It should have surprised no one, then, when the administration saw Bolton’s Libya comments and raised him a canceled peace talk. 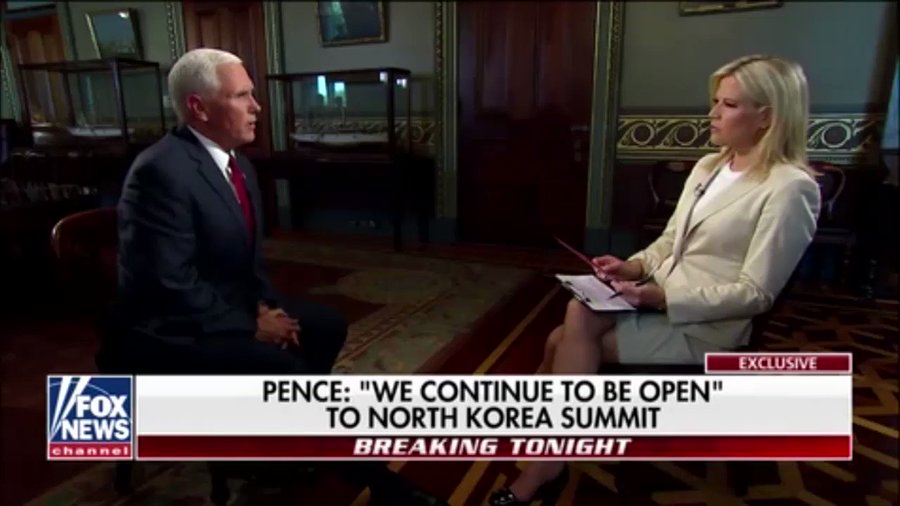 As @POTUS Trump made clear, this will only end like the Libya model ended if Kim Jong-un doesn't make a deal. 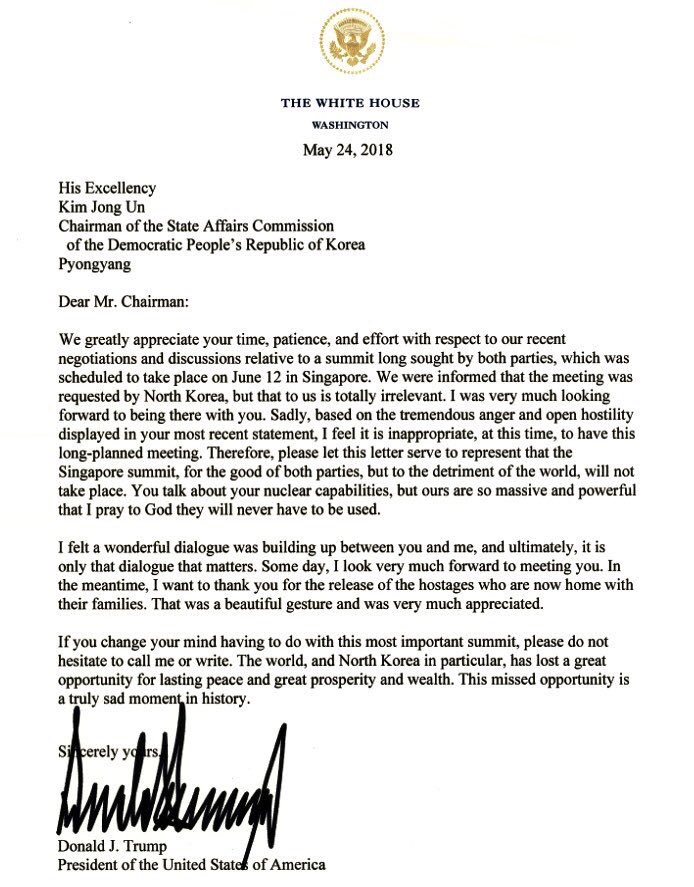 Sadly, I was forced to cancel the Summit Meeting in Singapore with Kim Jong Un.

“You know, there were some talk about the Libya model last week,” Vice President Pence told Fox News on Saturday. “And you know, as the president made clear, you know, this will only end like the Libya model ended if Kim Jong-un doesn’t make a deal.”

“Some people saw that as a threat,” Fox’s Martha MacCallum replied, because there is no other way it could possibly be interpreted.

Pence blathered something about it being “a fact”, not a threat, but that is because he is a fake plastic doll manufactured by Raytheon. It was an extremely obvious and blatant threat, so of course North Korea responded accordingly. Below is the full text of the response to Pence’s statement by North Korea’s Vice Foreign Minister Choe Son Hui, which reportedly was the basis for Trump’s cancellation of the scheduled summit in Singapore:

“At an interview with Fox News on May 21, US Vice-President Pence made unbridled and impudent remarks that North Korea might end like Libya, military option for North Korea never came off the table, the US needs complete, verifiable and irreversible denuclearisation, and so on.

As a person involved in the US affairs, I cannot suppress my surprise at such ignorant and stupid remarks gushing out from the mouth of the US vice-president.

If he is vice-president of “single superpower” as is in name, it will be proper for him to know even a little bit about the current state of global affairs and to sense to a certain degree the trends in dialogue and the climate of détente.

We could surmise more than enough what a political dummy he is as he is trying to compare the DPRK, a nuclear weapon state, to Libya that had simply installed a few items of equipment and fiddled around with them.

Soon after the White House National Security Adviser Bolton made the reckless remarks, Vice-President Pence has again spat out nonsense that the DPRK would follow in Libya’s footstep.

It is to be underlined, however, that in order not to follow in Libya’s footstep, we paid a heavy price to build up our powerful and reliable strength that can defend ourselves and safeguard peace and security in the Korean peninsula and the region.

In view of the remarks of the US high-ranking politicians who have not yet woken up to this stark reality and compare the DPRK to Libya that met a tragic fate, I come to think that they know too little about us.

To borrow their words, we can also make the US taste an appalling tragedy it has neither experienced nor even imagined up to now.

Before making such reckless threatening remarks without knowing exactly who he is facing, Pence should have seriously considered the terrible consequences of his words.

It is the US who has asked for dialogue, but now it is misleading the public opinion as if we have invited them to sit with us.

I only wonder what is the ulterior motive behind its move and what is it the US has calculated to gain from that.

We will neither beg the US for dialogue nor take the trouble to persuade them if they do not want to sit together with us.

Whether the US will meet us at a meeting room or encounter us at nuclear-to-nuclear showdown is entirely dependent upon the decision and behavior of the United States.

In case the US offends against our goodwill and clings to unlawful and outrageous acts, I will put forward a suggestion to our supreme leadership for reconsidering the DPRK-US summit.”

Trump cancels North Korea summit? Actually John Bolton already torpedoed it by telling North Korea to self destruct with the “Libya model”. This was perfect warmonger strategy to stop the threat of peace breaking out on the Peninsula. South Korea, please stay the course!

The message of Trump’s withdrawal couldn’t be more clear: we get to threaten you, you don’t get to threaten us. This extremely one-sided dynamic is not a style of negotiation that any sane person would go along with if they didn’t have to, and as Choe pointed out, North Korea doesn’t have to. Libya had only the barest rudiments of what could have eventually one day become a nuclear program. North Korea has a full arsenal, and thus a much bigger stack of bargaining chips. A negotiation at gunpoint can only be one-sided if the other side has no gun.

This negotiation was never meant to succeed. Publicly stating that North Korea gets “the Libya model” was like a hostage negotiator offering “the Waco model”. It was plainly designed to fail.

Of course the US-centralized empire has no intention of a mutually beneficial negotiation with a sovereign nation. That isn’t how imperialism works. You either join the mass of tightly allied nations which function in effective unison on foreign policy, or you are smashed like Libya. This policy of threatening nations to join the empire on pain of decimation is what is causing all nonconforming nations to form into a growing and increasingly close alliance of their own, and it is what is causing them to seek nuclear weapons so that they don’t end up like Libya.

If there’s a silver lining to be found in all of this, it was summed up by the Ron Paul Liberty Report’s Daniel McAdams:

“I think Trump is making America great again by making America irrelevant. We are irrelevant in the North and South peace talks right now. The ball is completely in [South Korea President] Moon’s court, what is he going to do next; we’ve basically recused ourselves from the whole process. Which is very, very good for us. So I feel rather upbeat. I think although it’s always better to talk to people, and it would be better to talk, but in the current environment, for us to get out of the way is really the non-interventionist position.”

America getting out of the way would be great for everyone, especially for the Americans whose resources are being relentlessly consumed by constant aggressive interventionism and an oligarchy whose vastly disproportionate wealth is propped up with the barrel of a gun. The natural drive of plutocratic smash-and-grab imperialism is in the exact opposite direction of non-interventionism, but as people continue to wake up from the madness and the rest of the world refuses to be consumed by the blob, it’s possible that the empire ends not with a bang but with a barely noticed fizzle. And that is my sincere prayer for all of us.