(ZHE) — It became clear just how important it is to the US for Russia’s Nord Stream 2 gas pipeline project to fail two months ago when, as we described in “US Threatens Sanctions For European Firms Participating In Russian Gas Pipeline Project“, the U.S. State Department warned European corporations that they will likely face penalties and sanctions if they participate in the construction of Russia’s Nord Stream 2 on the grounds that “the project undermines energy security in Europe”, when in reality Russia has for decades been a quasi-monopolist on European energy supplies and thus has unprecedented leverage over European politics, at least behind the scenes. 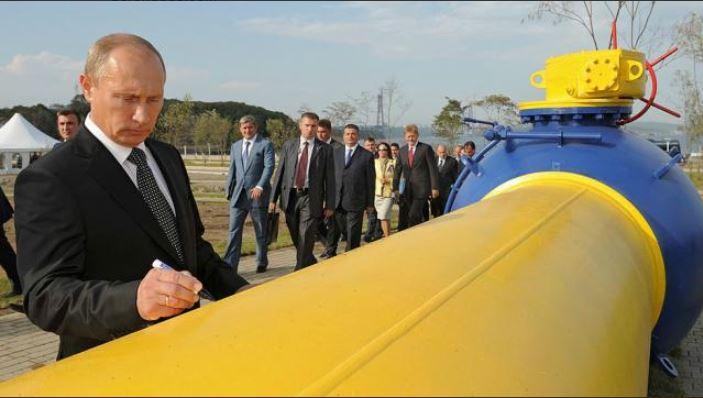 “As many people know, we oppose the Nord Stream 2 project, the US government does,” State Department spokeswoman, Heather Nauert said during a late March press briefing adding that “the Nord Stream 2 project would undermine Europe’s overall energy security and stability. It would provide Russia [with] another tool to pressure European countries, especially countries such as Ukraine.” And speaking of Ukraine, recall that in 2014, shortly after the US State Department facilitated the presidential coup in Ukraine, Joe Biden’s son Hunter joined the board of directors of Burisma, Ukraine’s largest oil and gas company. Surely that was merely a coincidence.

Nauert also said that Washington may introduce punitive measures against participants in the pipeline project – which could be implemented using a provision in the Countering America’s Adversaries Through Sanctions Act (CAATSA).

Fast forward to today, when the dreadfully named CAATSA act just made a repeat appearance; around the time Europe made it clear it would openly defy Trump’s Iran sanctions, the WSJ reported that Trump told Merkel that if she wants to avoid a trans-Atlantic trade war, the price would be to pull the break on Nord Stream 2, according to German, U.S. and European sources.


“The officials said Mr. Trump told German Chancellor Angela Merkel in April that Germany should drop support for Nord Stream 2, an offshore pipeline that would bring gas directly from Russia via the Baltic Sea. This would be in exchange for the U.S. starting talks with the European Union on a new trade deal.”

While it had long been suspected that Trump would push hard to dismantle Nord Stream 2 just so US nat gas exporters could grab a slice of the European market pie, the aggressive push comes as a surprise, and as the WSJ notes, “the White House pressure reflects its hard ball tactics on trade, moves that have contributed to rising tensions between Europe and the U.S. and raised fears in export-dependent Germany of a tit-for-tat on tariffs that could engulf its car industry.” 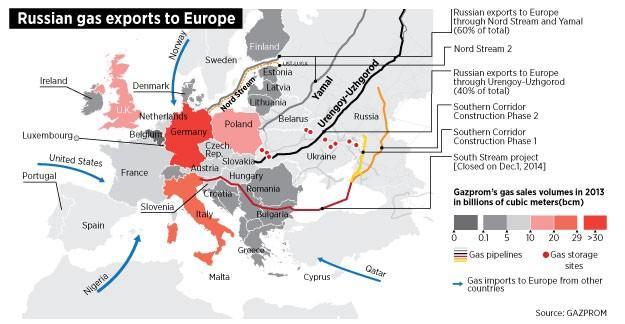 The Nord Stream II (or NS2) project was started in 2015 is a joint venture between Russia’s Gazprom and European partners, including German Uniper, Austria’s OMV, France’s Engie, Wintershall and the British-Dutch multinational Royal Dutch Shell. The pipeline is set to run from Russia to Germany under the Baltic Sea – doubling the existing pipeline’s capacity of 55 cubic meters per year, and is therefore critical for Europe’s future energy needs.

NS2 is the second phase of an existing pipeline that already channels smaller amount of gas from Russia to Germany. Construction for the second phase started this week in Germany, after investors committed €5 billion ($5.9 billion) to the venture.

Trump has publicly criticized the Nord Stream 2 pipeline, saying at a meeting with Baltic State leaders at the White House this year that “Germany hooks up a pipeline into Russia, where Germany is going to be paying billions of dollars for energy into Russia…That’s not right.”

“Donald Trump is a deal maker…there is a deal to be made if someone (in Germany) stood up and said ‘Help us protect our auto industry a little bit more, because we’re great at it and we’re going to help you on Nord Stream 2’,” said one U.S. official, who was present at the April meeting between Ms. Merkel and Mr. Trump.

Raising the pressure further, Sandra Oudkirk, a senior U.S. diplomat, told journalists in Berlin on Thursday that as a Russian energy project the pipeline could face U.S. sanctions, putting any company participating in it at risk.
* * *
The Kremlin shot back immediately as spokesman Dmitry Peskov called the U.S. efforts “a crude effort to hinder an international energy project that has an important role in energy security.”

“The Americans are simply trying crudely to promote their own gas producers,” he said.
He is, of course, right, even if the official explanation is that Washington opposes the pipeline because it would make Ukraine—currently the main transit route for Russian gas headed west—and other U.S. allies in the EU more vulnerable to Russian pressure. German officials also say the U.S. is eager to displace Russia as a provider of gas to Europe, hence confirming with the Russian said.

Of course, in the end it’s all a question of leverage, and who has more, and right now Trump believes that by threatening European auto exports hostage, he has all of it.
* * *
Still, that Trump thinks he can interject after three years of trade negotiations with an abrupt demand while providing no alternatives, is rather stunning, but understandable. As Alex Gorka of the Strategic Culture Foundation wrote, on March 15, a bipartisan group of 39 senators led by John Barrasso (R-WY) sent a letter to the Treasury Department.

They oppose NS2 and are calling on the administration to bury it. Why? They don’t want Russia to be in a position to influence Europe, which would be “detrimental,” as they put it.  And, as Gorka wrote, their preferred tool to implement this obstructionist policy is the use of sanctions, precisely what we are seeing currently.

To be sure, 39 out of 100 is a number no president can ignore as powerful pressure emanating from US corporations and lobbies was being applied on the administration. Even before the senators wrote their letter, Kurt Volker, the US envoy to Ukraine, had claimed that NS2 was a purely political, not commercial, project.

As we said in March, “No doubt other steps to ratchet up the pressure on Europe will follow.” Little did we know that less than 2 months later, the US and Europe would be embroiled in a bruising trade war in which the fate of NS2 is suddenly the key variable.
* * *
So will Trump win, and will US LNG replace Russian exports?

While Merkel hasn’t yet dropped her support for the pipeline, she said on Thursday the EU had agreed at a summit Wednesday night to offer the U.S. “closer cooperation” in the field of gas in exchange for a permanent exemption from the steel and aluminum tariffs, suggesting that Nord Stream 2 may soon be a trade war casualty.

Should Europe fold, it should expect a surge in energy inflation: Liquefied gas from the U.S. needs to be shipped over the Atlantic and would be considerably more expensive than Russian gas delivered via pipelines. A senior EU official working on energy regulation said Russian gas would be at least 20% cheaper.

“Trump’s strategy seems to be to force us to buy their more expensive gas, but as long as LNG is not competitive, Europe will not agree to some sort of racket and pay extortionate prices,” an EU official said.

Which, amusingly, is precisely what Trump’s brute trade overture is: an global racket.

Germany’s pipeline plan has long been controversial with Ukraine, as well as several EU countries on the bloc’s eastern edge who fear it gives Russian President Vladimir Putin power over gas deliveries—which Berlin has so far largely ignored.

Trump has been pushing for better access for U.S. companies to an EU market he has criticized as over-protected. Barring an EU offer to address Mr. Trump’s grievances, the U.S. will hit Europe with punitive steel and aluminum tariffs on June 1. The EU has promised retaliatory tariffs.
* * *
So now that the ball is in Merkel’s court, how will she respond?  On Friday, the German chancellor is traveling to Russia on Friday to meet Vladimir Putin in hopes of brokering a compromise that would satisfy the U.S. and her European partners.

She will ask Mr. Putin for a deal that would preserve the lucrative transit trade—Ukraine gets a fee for letting Russian gas through its territory on the way to eastern Europe—even after Nord Stream 2 comes online in 2019, a German official said.

Meanwhile, German government officials say that since all the permits for Nord Stream 2 have been issued, the WSJ notes that there is no legal way to stop the project, which is run by Gazprom , the Russian energy giant, under financing agreements with international companies such as Engie, OMV, Shell, Uniper and Wintershall.