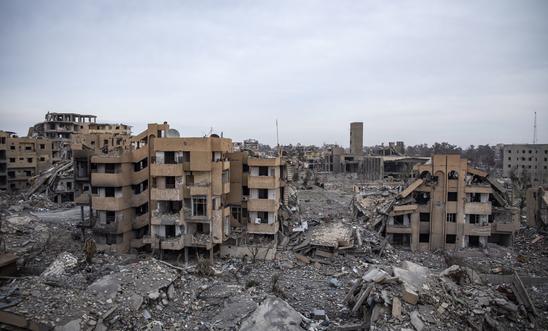 First-hand investigations in the destroyed city reveal extent of civilian casualties, as Coalition’s ‘war of annihilation’ decimated extended families and neighbourhoods
‘On the ground in Raqqa we witnessed a level of destruction comparable to anything we’ve seen in decades of covering the impact of wars’ - Donatella Rovera
City was blitzed but ISIS fighters were allowed safe passage out of Raqqa in deal with Coalition and Kurdish forces
UK carried out 215 airstrikes but claims it killed no civilians
‘The UK needs to come clean over its role in this carnage’ - Kate Allen
US-led Coalition forces killed hundreds of civilians - and injured thousands - in the Syrian city of Raqqa in the process of “liberating” them from the Islamic State armed group, Amnesty International said in a new report today, ahead of tomorrow’s one-year anniversary of the Raqqa offensive.
Amnesty researchers visited 42 Coalition airstrike sites across the ruined city and interviewed 112 civilian residents who survived the carnage while losing loved ones in the attacks.
The victims highlighted in Amnesty’s report cut across the city’s socio-economic spectrum and range in age from a one-year-old baby girl to a man in his 80s.
Their harrowing stories and immense losses stand in stark contrast to the Coalition’s repeated claims that they took great pains to minimise civilian casualties. In September, at the height of the conflict, Coalition commander US Lt Gen Stephen Townsend wrote that “there has never been a more precise air campaign in the history of armed conflict”. Raqqa residents, such as airstrike survivor Munira Hashish, tell a different story:
“Those who stayed died and those who tried to run away died. We couldn’t afford to pay the smugglers; we were trapped.”
She and her children eventually managed to escape through a minefield “by walking over the blood of those who were blown up as they tried to flee ahead of us.”
Raqqa’s residents were trapped as fighting raged between ISIS militants and Kurdish-led Syrian Democratic Forces (SDF) fighters, supported by the Coalition’s air and artillery strikes. Meanwhile, ISIS mined escape routes and shot at civilians trying to flee. Hundreds of civilians were killed: some in their homes, some in the very places where they’d sought refuge, and others as they tried to escape.
Amnesty’s research and Raqqa residents’ accounts - detailed in the 70-page report, ‘War of annihilation’: Devastating Toll on Civilians, Raqqa - throw into serious question the Coalition’s insistence that their forces did enough to minimise civilian harm. The report details four emblematic cases (see below) of civilian families brutally impacted by the aerial bombardment.

Between them, they lost 90 relatives and neighbours - 39 from a single family - almost all killed by Coalition airstrikes. Amnesty believes the cases are part of a wider pattern and provide a strong prima facie case that many lethal Coalition air and artillery strikes were disproportionate or indiscriminate attacks carried out in violation of international humanitarian law and are potential war crimes.
Shortly before the military campaign, US Defence Secretary James Mattis spoke of a “war of annihilation” against ISIS in Raqqa, and from 6 June to 12 October 2017 the US-led Coalition operation - involving US, British and French forces - carried out tens of thousands of airstrikes. The US military said it fired 30,000 artillery rounds during the offensive, while its forces are known to have been responsible for more than 90% of the airstrikes. Much of the city was destroyed, with countless homes, private and public buildings and infrastructure reduced to rubble or damaged beyond repair.
Amnesty has written to defence officials in the USA, UK and France seeking additional information about the report’s cases and other attacks, with Amnesty asking about Coalition tactics, specific means and methods of attack, choice of targets, and precautions taken in the planning and execution of attacks, and about any investigations carried out to date.
Donatella Rovera, a Senior Crisis Response Adviser at Amnesty International, said:

“The Coalition’s claims that its precision air campaign allowed it to bomb ISIS out of Raqqa while causing very few civilian casualties do not stand up to scrutiny.

“On the ground in Raqqa we witnessed a level of destruction comparable to anything we’ve seen in decades of covering the impact of wars.

“A senior US military official said that more artillery shells were launched into Raqqa than anywhere since the Vietnam war. Given that artillery shells have margin of error of over 100 metres, it is no surprise that the result was mass civilian casualties.

“When so many civilians are killed in attack after attack, something is clearly wrong, and to make this tragedy worse, so many months later the incidents have not been investigated. The victims deserve justice.”

The case of the Badran family illustrates how dire the situation became for civilians trapped in Raqqa. Over the course of several weeks, 39 family members were killed in four separate Coalition air strikes as they moved from place to place inside the city, desperately trying to avoid rapidly shifting frontlines.
“We thought the forces who came to evict Daesh [ISIS] would know their business and would target Daesh and leave the civilians alone. We were naïve. By the time we had realised how dangerous it had become everywhere, it was too late; we were trapped,” Rasha Badran told Amnesty. After several attempts to flee, she and her husband finally managed to escape, having lost their entire family, including their only child, a one-year-old girl named Tulip, whose tiny body they buried near a tree.
The Aswads were a family of hard-working traders in Raqqa. Some of them stayed behind to protect their belongings from looting, seeking shelter in their basement. But, on 28 June a Coalition air strike destroyed the building, killing eight civilians, mostly children. Another family member lost his life when he stepped on an ISIS mine when he returned to the city to try to recover the bodies days later.
Despite repeated attempts to flee, the Hashish family lost 17 members, mostly women and children, over a two-week period in August. A Coalition air strike killed nine, seven died as they tried to flee via a road which had been mined by ISIS, and two others were killed by a mortar launched by SDF.
The fate of the Fayad family illustrates how a Coalition blitz during the final hours of the battle wiped out entire families in the Harat al-Badu area of central Raqqa, where ISIS fighters were known to be using civilians as human shields. The deaths of Mohammed “Abu Saif” Fayad and 15 family members and neighbours in Coalition airstrikes early on 12 October seem all the more senseless because, just hours later, the SDF and the Coalition agreed a deal with ISIS, granting remaining ISIS fighters safe passage out of Raqqa.
Benjamin Walsby, an Amnesty International Middle East Researcher, said:

“If the coalition and their SDF allies were ultimately going to grant ISIS fighters safe passage and impunity, what possible military advantage was there in destroying practically an entire city and killing so many civilians? Raqqa’s civilians are returning home to ruins, pulling loved ones out of rubble, and facing death or injury from mines, IEDs and unexploded ordnance. The Coalition’s refusal to acknowledge its role in creating this catastrophic situation adds insult to injury.”

According to the Ministry of Defence, UK forces carried out 215 airstrikes in Raqqa. Up until last month, UK ministers had repeatedly claimed that UK forces in Syria and Iraq had killed no civilians. On 2 May, the Defence Secretary Gavin Williamson said that a UK drone missile killed a civilian on a motorcycle in eastern Syria in March. Amnesty has written to the Ministry of Defence seeking detailed information over the UK’s airstrikes in Raqqa.
Kate Allen, Amnesty International UK's Director, said:

“Civilians in Raqqa have suffered grievously at the hands of Islamic State, but they’ve also been imperilled by the Coalition’s disproportionate aerial attacks.

“The Coalition’s operations in Raqqa have killed hundreds and injured thousands of civilians and the UK needs to come clean over its role in this carnage.

“Having conducted more than 200 airstrikes in Raqqa, the UK needs to be able to show that its targeting was proportionate and that it took proper measures to avoid unnecessary civilian casualties in its joint operations with the US and others. Instead of repeating a mantra about there being ‘no evidence’ of civilian casualties from UK airstrikes, the MoD should publish proper data about its Raqqa attacks - dates, times, locations, weapons used and intended targets.

“Crucially, ministers should explain how the UK has investigated the impact of its attacks in both Raqqa and Mosul. For example, has the UK carried out on-the-ground investigations at the sites it bombed and interviewed survivors and witnesses?

“With a Defence Committee set to examine Operation Shader, now is the time for the UK to demonstrate to the British public that the UK’s military role in Syria and Iraq has been responsible and lawful. The Government should establish a thorough, impartial investigation into all allegations of unlawful attacks and civilian casualties from UK operations in Raqqa and Mosul.”


en: 'US Airstrikes Killing Hundreds of Civilians in Syria’s Raqqa'