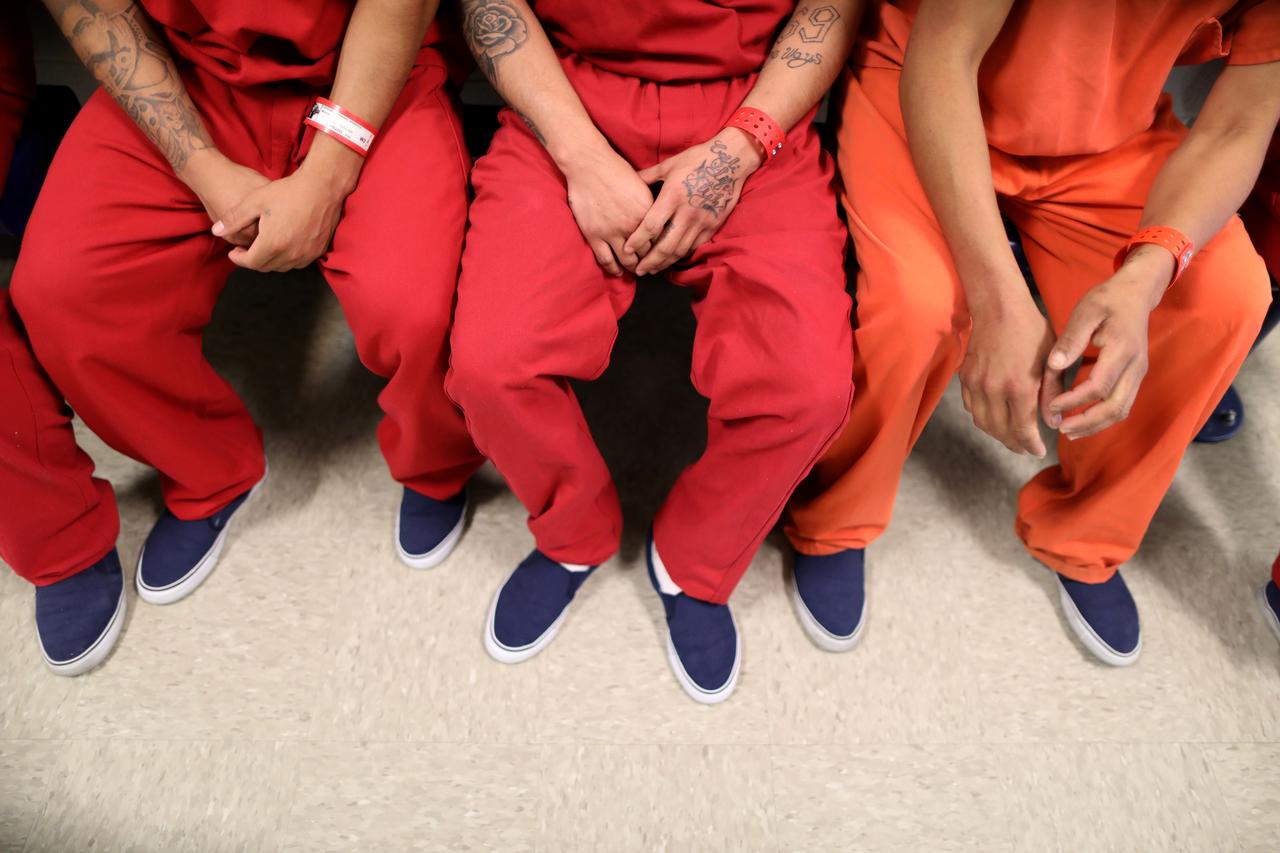 He could content himself with a jailhouse diet that he said left him perpetually hungry. Or he could labor in the prison’s kitchen to earn money to buy extra food at the commissary.
Cruz went to work. But his $1-a-day salary at the privately run Adelanto Detention Facility did not stretch far.
A can of commissary tuna sold for $3.25. That is more than four times the price at a Target store near the small desert town of Adelanto, about two hours northeast of Los Angeles. Cruz stuck with ramen noodles at 58 cents a package, double the Target price. A miniature deodorant stick, at $3.35 and more than three days’ wages, was an impossible luxury, he said.
“If I bought that there wouldn’t be enough money for food,” Cruz said.
Tuna and deodorant would seem minor worries for detainees such as Cruz. Now 25, he sought asylum after fleeing gangs trying to recruit him in his native Honduras, a place where saying “no” can mean execution.
But immigration attorneys say the pricey commissary goods are part of a broader strategy by private prisons to harness cheap inmate labor to lower operating costs and boost profits.
Immigrants and activists say facilities such as Adelanto, owned by Boca Raton, Fla.-based Geo Group Inc (GEO.N), the nation’s largest for-profit corrections company, deliberately skimp on essentials, even food, to coerce detainees to labor for pennies an hour to supplement meager rations.
Geo Group spokesperson Pablo Paez called those allegations “completely false.” He said detainees are given meals approved by dieticians, the labor program is strictly voluntary, and wage rates are federally mandated.
The company said Geo Group contracts with outside vendors to run its commissaries, whose prices “are in line with comparable local markets.” It also said Geo Group makes a “minimal commission” on commissary items, most of which goes into a “welfare fund” to purchase recreational equipment and other items for detainees.
Relatives can send money electronically to fund their loved ones’ commissary accounts, for fees that can reach as high as 10 percent of the amount deposited, some families report. But for many immigrant detainees, scrubbing toilets or mopping floors is the only way they say they can earn enough to stay clean and fed.
You “either work for a few cents an hour or live without basic things like soap, shampoo, deodorant and food,” detainee Wilhen Hill Barrientos, 67, said in a class-action lawsuit filed last year by the Southern Poverty Law Center against Nashville-based CoreCivic Inc (CXW.N), the nation’s second-largest for-profit prison operator. In the complaint, Barrientos said guards told him to “use his fingers” when he asked for toilet paper at the Stewart Detention Center, located in rural Lumpkin, Georgia.
Detainees are challenging what they say is an oppressive business model in which the companies deprive them of essentials to force them to work for sub-minimum wages, money that is soon recaptured in the firms’ own commissaries.
“These private prison companies are profiting off of what is essentially a company-store scenario,” said the SPLC’s Meredith Stewart, a lead attorney on the class action.
Immigrant rights groups have filed similar lawsuits against CoreCivic and Geo Group in California, Colorado, Texas and Washington.
Government watchdogs and lawmakers are taking notice too.
In November, 11 U.S. senators, including 2020 presidential hopeful Elizabeth Warren of Massachusetts, sent letters to Geo Group and CoreCivic lambasting the “perverse profit incentive at the core of the private prison business,” which has benefited from a crackdown on illegal immigrants under U.S. President Donald Trump.
The senators cited a December 2017 report from the U.S. Office of the Inspector General documenting problems at lockups contracted by U.S. Immigration and Customs Enforcement (ICE). The inspector general found spoiled, moldy and expired food, and cited detainees’ complaints that hygiene products were “not provided promptly or at all,” the report said.
The lawmakers have demanded Geo Group and CoreCivic respond to allegations of detainee mistreatment.
Geo Group said a comprehensive, detailed response is underway. The company told Reuters that Geo Group has “already taken steps to remedy areas where our processes fell short of our commitment to high-quality care.”
CoreCivic spokeswoman Amanda Gilchrist said the company disagrees with the senators’ assertions, and that it provides “all daily needs” of detainees.
She said CoreCivic follows all federal standards for ICE-contracted facilities, including management of the outside vendors that run its commissaries, prices for commissary products, and fees charged to families for depositing funds into detainees’ commissary accounts.

The U.S. for-profit prison industry has exploded over the past two decades. In 2016, 128,300 people - roughly 1 in 12 U.S. prisoners - were incarcerated in private lock-ups. That is an increase of 47 percent from 2000, according to the Bureau of Justice Statistics.
Geo Group and CoreCivic together manage over half of U.S. private prison contracts, with combined revenues of nearly $4 billion in 2017. ICE is the No. 1 customer by revenue for both companies.
Trump’s immigration polices have been a boon for the industry, which spent hundreds of thousands of dollars on his election and inauguration. In fiscal 2019, the number of people in ICE detention has averaged 45,200 daily, according to agency spokesman Vincent Picard. That is up nearly 19 percent from fiscal 2017.
Both Geo Group and CoreCivic have added hundreds of immigration detention beds over the past year. Stock prices for the two companies are up about 30 percent since Trump’s election.
The government pays private prison companies fees ranging from roughly $60 to $130 daily for the care and feeding of each detainee.
At CoreCivic’s Stewart Detention Center in Georgia, which houses about 1,700 undocumented immigrants, ICE pays a per diem of $62.03 for each detainee housed there. CoreCivic’s revenue from Stewart alone was $38 million last year, court records show.

Detainee Barrientos, the lead lawsuit plaintiff, said in court documents he worked 7 days a week at the facility in order to purchase hygiene products and phone cards to call family members in Guatemala.
Those basics can add up. Reuters viewed a copy of the center’s commissary price list. It shows detainees are charged $11.02 for a 4 oz. tube of Sensodyne toothpaste, available on Amazon.com for $5.20.
Dove soap priced at $2.44 at the commissary is available for just over a dollar at Target. A 2.5 oz tube of Effergrip denture cream that sells for $4.99 at Walmart is $7.12 at the commissary.
Fees are pricey too. Vioney Gutierrez, a former detainee at Geo Group’s Adelanto facility in California, said 10 percent of the money her family spent to fund her commissary account was consumed by fees.
“When my daughter put in $40, I got $36,” said Gutierrez, 37. A native of Mexico, she said she spent six months at Adelanto in 2018 after asking for asylum at a port of entry. She is currently out on bond and staying with family in Oregon while she awaits the outcome of her deportation case.
Geo Group said its inmate commissary account services are provided by a third-party vendor, and that it does not profit from those transactions.
At Adelanto, Gutierrez said it cost $1 a minute to make calls to Mexico, and even more to places further afield, prices that keep many detainees from communicating with their families.
Geo Group said ICE contracts with a third-party telecom vendor and that the company plays “no role whatsoever in communications services.”
High commissary prices have long been a complaint of prison reformers. But for immigrant detainees, many of whom borrowed money or drained savings to reach the United States, the prices are particularly prohibitive.
Cruz, the Honduran detainee, spent eight months at Adelanto last year before an immigrant rights organization paid the $10,000 bond for his release. He is now in Texas awaiting the outcome of his case.
In his final months at Adelanto, Cruz said he resorted to bartering, trading shoes he wove out of plastic bags for ramen and cookies.
Reporting By Michelle Conlin and Kristina Cooke; Editing by Marla Dickerson