Candles, birthday cake, presents, friends and family. That’s what every parent hopes for their child’s birthday. Instead of festivities, Tomás spent his (eighth) birthday behind bars—for the second year in a row.

The reason why? Because Tomás and his mom were jailed in the only place in the country where you can hold a child who has never committed a violent crime for over 600 days: Berks Country, PA. Tomás and his mom, Natalia, are amongst at least 60 other moms, dads, and children who were locked up after seeking safety here, though they fled from violence in their home countries. 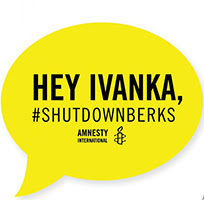 Together we can shut down Berks. Take action now.


Today, we’re calling on Ivanka Trump to join us in the fight for kids like Tomás. Ivanka campaigned for her father on a commitment to support kids and mothers—shouldn’t that include all kids—even the ones at Berks?


Tell Ivanka to help the kids at Berks.


We all share a responsibility to help people who have lost everything, and to give them a chance to rebuild their lives safely the same way all of us would need to if we were in this horrible situation.
That’s why Amnesty International is fighting to ensure that people who fled to the US seeking safety have a fair shot at it.


A fair shot never happened for Tomás, whose real name we’re withholding for his safety. After hundreds of days behind bars—where he suffered PTSD (posttraumatische stressstoornis: PTSS, Ap) and his weight shrank to just 40 pounds—he and his mother were deported without ever having a chance to fully make their case for asylum. They face extreme danger, perhaps even death. We can’t let that happen again.


Take action to help the kids at Berks now.


Thank you for taking action. 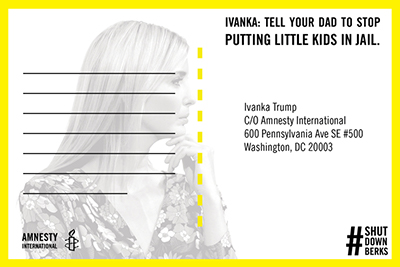 Ivanka Trump campaigned for her father on a commitment to helping kids and their mothers. But what about the ones who are spending months, sometimes years, behind bars in Berks County, Pennsylvania, in what’s known as the “baby jail”? They fled violence and persecution in countries like Honduras, dreaming of safety in the US. Now these little kids are being detained, some for half their lives, learning to walk behind bars. We’re asking Ivanka Trump to show compassion, and tell her father to #ShutDownBerks.


AMNESTY INTERNATIONAL USA LAUNCHES CAMPAIGN TO FREE YOUNG CHILDREN AND MOTHERS DETAINED BY ICE FOR OVER 500 DAYS
Amnesty International USA (AIUSA) is launching a campaign today urging Immigration and Customs Enforcement (ICE) to release several families with young children being detained at the Berks County Residential Center in Pennsylvania. Four of the 35 children currently detained at Berks – aged three, four, seven and 16 – have been at the Center for over 500 days, despite having pending applications for legal permanent residency.

AIUSA sent a letter to ICE on March 9 requesting that these families be granted parole and is mobilizing its over 1.2 million U.S. members and supporters to call the agency to demand that the families be released.

“These four children have spent a significant amount of their lives essentially behind bars. The U.S. cannot continue to treat those fleeing horrific violence like criminals,” said Margaret Huang, Amnesty International USA executive director. “These families were detained under the Obama administration’s unlawful policy of using detention as deterrence against those fleeing violence and insecurity. Now, in the face of President Trump’s aggressive and inhumane immigration orders, we are deeply concerned for these families and others like them in the U.S. We will fight to ensure that people with asylum claims are given a fair hearing and humane treatment.We must do everything we can to ensure protection for people who are fleeing violence.”

Researchers from Amnesty International have worked closely with attorneys who represent the families held in Berks County, one of three family detention centers operated by the U.S. government. Berks is currently holding 34 families – 15 of them for more than a year – many of whom come from a region known as the Northern Triangle which includes El Salvador, Guatemala, and Honduras. The Northern Triangle is an area widely recognized for its extreme levels of violence and insecurity, which Amnesty has also documented extensively.
All four children were granted a Special Immigrant Juvenile Status (SIJS) in late 2016. With SIJS, a state court has determined that it is not in a minor’s best interest to return to his or her home country because of abuse, abandonment, or neglect by one or both parents. In this instance it was determined that these children “were abandoned, abused, or neglected by [their] father[s]…as such, [their] mother[s] are now the custodial parent, and responsible for all decision regarding their court proceedings, custody and care.”

Therefore, it is essential that the mothers and children be released together. Three of the children have already been issued their Employment Authorization Document in January 2017, and one is awaiting his.

This enables them to apply for a social security number. All have pending applications for legal permanent residency. Further, their mothers have stays of removal granted by the 3rd Circuit Court of Appeals, while they challenge their removal orders in federal court.


Each of the four families has an unchallenged sponsor in the United States, who is ready and willing to take them in, and ensure their appearance in court. Despite this, their SIJ status, and pending applications for legal permanent residency, ICE officials refuse to release these four children and their mothers from detention.