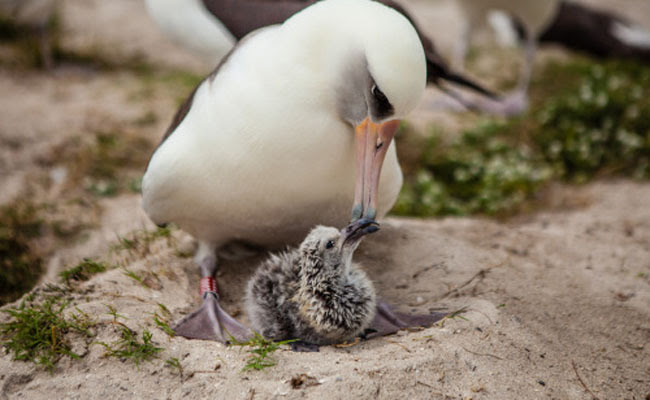 Wisdom, a Laysan albatross who is now the oldest known banded bird in the world, has continued to surprise wildlife officials and her fans by reappearing every year at the Midway Atoll National Wildlife Refuge in the Pacific, and this year was no exception.

Now believed to be at least 65 years old, Wisdom returned again earlier this year with her mate who has been dubbed Goo or Mr. Goo by refuge staff because of the number on his leg band. Wisdom was spotted earlier this winter incubating  yet another egg. 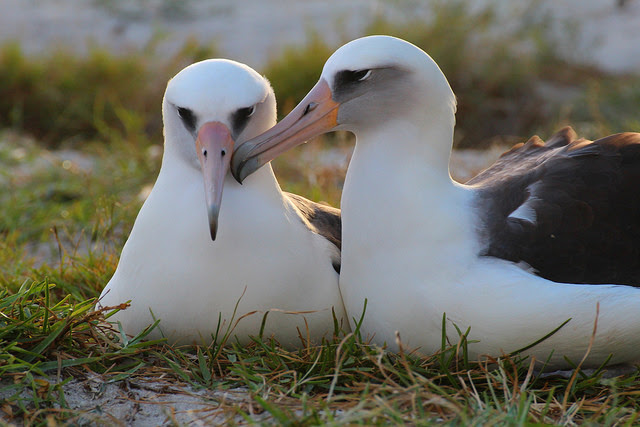 Earlier this month, to the delight of her fans, the U.S. Fish and Wildlife Service announced that her newest chick was spotted and was named Kūkini, which is Hawaiian for messenger. 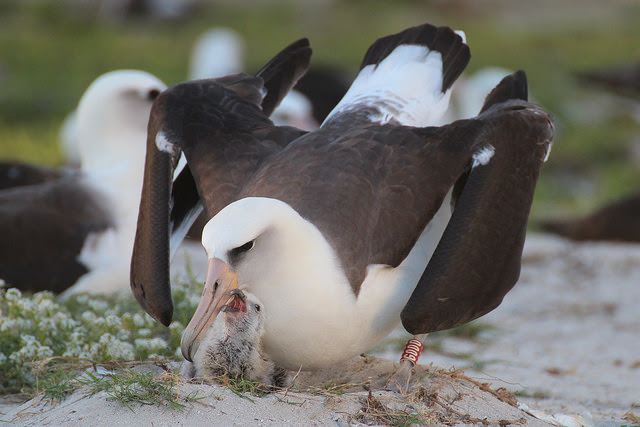 Wisdom was first banded back in 1956 when she was believed to be just 5-years-old and has managed to survive decades, outliving many of her relatives whose lifespans are estimated to be between 12 and 40 years in the wild. She’s also believed to have flown an incredible six million ocean miles since she was first tagged.

Laysan albatrosses mate for life , after engaging in an elaborate courtship ritual, and lay only one egg every year, making each one precious to expecting parents. According to the FWS, Wisdom has raised at least eight chicks since 2006, and as many as 40 throughout her life. 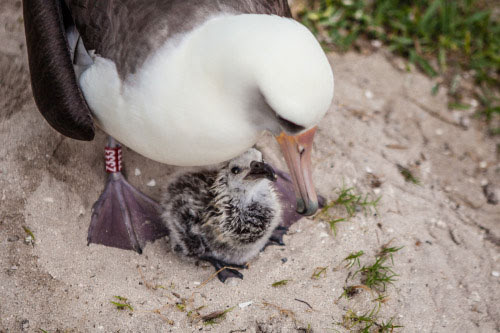 “Wisdom is an iconic symbol of inspiration and hope,” said Robert Peyton, Refuge Manager. “From a scientific perspective, albatrosses are a critical indicator species for the world’s oceans that sustain millions of human beings as well. In the case of Wisdom, she is breaking logevity records of previously banded birds by at least a decade. With over a million albatross on Midway Atoll alone, this shows just how much is left to learn about the natural world around us.”
While Wisdom’s new chick is being celebrated, the FWS notes that thousands of others are also welcoming the next generation at Midway. In December, the agency counted 470,000 active nests across the entire atoll, which is now the largest albatross nesting colony in the world.

The number of potential new chicks hatching this year may seem high, but each one is vital to the survival of this species. According to the National Audubon Society, of the 22 species of albatross recognized by the International Union for Conservation of Nature (IUCN), 15 are threatened with extinction, and eight species are either endangered or critically endangered.

Unfortunately, they continue to face a major threat from being caught in fishing gear and drowning, which is killing an estimated 100,000 albatross every year, while they also face the growing problem of plastic in our oceans.

The Audubon Society is pushing for legislation in the form of the Albatross and Petrel Conservation Act of 2016 (HR 4480), which will bring the U.S. in line with other countries that are working to protect these seabirds under the Agreement on the Conservation of Albatrosses and Petrels (ACAP).

For updates on Wisdom and her family, check out the USFWS – Pacific Region on Flickr and Tumblr. For more on how to help support efforts to protect the albatross, visit the National Audubon Society.