More lies prevail with regard to MH17. Recent press reports quoting the Dutch Safety Board’s October 2015 final report point to “a surface-to-air missile [which] exploded near the left side of the passenger plane bringing down the aircraft.”

Although the Dutch report concluded that the Russian-made BUK surface-to-air missile with a 9N314M warhead brought down the Boeing 777, it did not mention which side was responsible for firing the missile…  (International Business Times, March 8, 2016

The evidence presented in this Global Research article (below) first published on July 31, 2014 contradicts the report of the Dutch Safety Board and provides evidence:

The West continues to accuse Russia and the Donbass separatists of having brought down the plane with a surface to air missile. IT’S A LIE. The Dutch investigation has been twisted.

Washington’s agenda in liaison with the Kiev regimes is to blame Russia. In recent developments (August 3, 2016), Ukraine president Poroshenko has visited Malaysia for discussions with Prime Minister Razak Najib:

“Prime Minister Datuk Seri Najib Razak said Malaysia will work with Ukraine to bring the perpetrators to justice. “We will do whatever we can to find the truth for the sake of families who lost their loved ones in this tragic incident. “We are waiting for the criminal investigation report, which is expected to be tabled by the year-end, followed by a meeting to decide on the next course of action,” said Najib.(New Straights Times, August 4, 2016)

The evidence available in September 2014 –including a BBC report which the BBC decided to suppress– refutes the official story.

As we recall, the alleged role of Russia in bringing down the plane was used as a justification to implement the economic sanctions regime against Moscow. Although not explicitly mentioned by the Dutch investigators, Moscow remains the “main suspect” in this twisted and fraudulent investigation, which will no doubt be the object of a new gush of media lies and distortions. Moscow has expressed its disagreement.

“They are fundamentally wrong, the lack of logic there is beyond comparison… I had a feeling that the commission was cherry-picking the evidence to suit a theory they had chosen.” Deputy head of Russia’s federal air transport agency Oleg Storchevoi (quoted by the Associated Press

Meanwhile, the Dutch investigators have decided to temporarily withhold their final verdict:

“it soon should determine the exact launch site of the missile that brought down the plane, killing all 298 people on board.

But Fred Westerbeke, the prosecutor leading the international probe, warned Monday that completing the investigation would take much longer. He declined to name a possible finishing date.

After briefing relatives of victims on the investigation, Westerbeke pledged to complete the investigation “as quickly as possible, if only because of the frustration among the families.” (AP, March 7, 2016)

Since July 2014, Global Research has compiled evidence and analysis which refutes the official story.

Our message to the families: The Dutch investigators are lying.
Numerous authors and specialists have contributed to the MH17 dossier, which is available on the Global Research website. Unequivocally this dossier refutes the official story.

Click Here to access an archive of 100 Global Research articles and reports on the downing of MH17.

Revelations of German Pilot: Shocking Analysis of the “Shooting Down” of Malaysian MH17. “Aircraft Was Not Hit by a Missile” By Peter Haisenko, July 30, 2014

According to the report of German pilot and airlines expert Peter Haisenko, the MH17 Boeing 777 was not brought down by a missile.
What he observed from the available photos were perforations of the cockpit:

The facts speak clear and loud and are beyond the realm of speculation: The cockpit shows traces of shelling! You can see the entry and exit holes. The edge of a portion of the holes is bent inwards. These are the smaller holes, round and clean, showing the entry points most likely that of a 30 millimeter caliber projectile. (Revelations of German Pilot: Shocking Analysis of the “Shooting Down” of Malaysian MH17. “Aircraft Was Not Hit by a Missile” Global Research, July 30, 2014) Based on detailed analysis Peter Haisenko reached  the conclusion that the MH17 was not downed by a missile attack:

This aircraft was not hit by a missile in the central portion. The destruction is limited to the cockpit area. Now you have to factor in that this part is constructed of specially reinforced material

The OSCE Mission
It is worth noting that the initial statements by OSCE (OVSE, AP) observers (July 31) broadly confirm the findings of Peter Haisenko:

Monitors from the Organization for Security and Cooperation in Europe reported that shrapnel-like holes were found in two separate pieces of the fuselage of the ill-fated Malaysia Airlines aircraft that was believed to have been downed by a missile in eastern Ukraine.

Michael Bociurkiw of the OSCE group of monitors at his daily briefing described part of the plane’s fuselage dotted with “shrapnel-like, almost machine gun-like holes.” He said the damage was inspected by Malaysian aviation-security officials .(Wall Street Journal, July 31, 2014)

The monitoring OSCE team has not found evidence of a missile fired from the ground as conveyed by official White House statements. As we recall, the US ambassador to the UN Samantha Power stated –pointing a finger at Russia– that the Malaysian MH17 plane was “likely downed by a surface-to-air missile operated from a separatist-held location”:

The team of international investigators with the Organisation for Security and Cooperation in Europe (OSCE) are uncertain if the missile used was fired from the ground as US military experts have previously suggested, the Wall Street Journal (WSJ) reported. (Malay Mail online, emphasis added)

The initial OSCE findings tend to dispel the claim that a BUK missile system brought down the plane.
Evidently, inasmuch as the perforations are attributable to shelling, a shelling operation conducted from the ground could not have brought down an aircraft traveling above 30,000 feet. 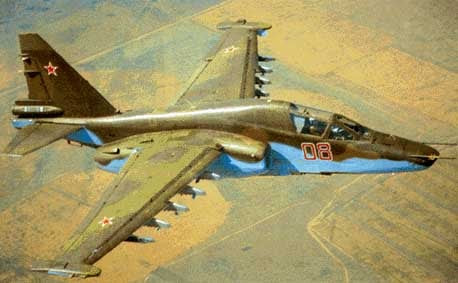 Peter Haisenko’s study is corroborated by the Russian Ministry of Defense which pointed to a Ukrainian Su-25 jet in the flight corridor of the MH17, within proximity of the plane.

Ironically, the presence of a military aircraft is also confirmed by a BBC  report conducted at the crash site on July 23.

All the eyewitnesses  interviewed by the BBC confirmed the presence of a Ukrainian military aircraft flying within proximity of Malaysian Airlines MH17 at the time that it was shot down:

Eyewitness #1: There were two explosions in the air. And this is how it broke apart. And [the fragments] blew apart like this, to the sides. And when …

Eyewitness #2: … And there was another aircraft, a military one, beside it. Everybody saw it.

Eyewitness #1: Yes, yes. It was flying under it, because it could be seen. It was proceeding underneath, below the civilian one.

Eyewitness #3: There were sounds of an explosion. But they were in the sky. They came from the sky. Then this plane made a sharp turn-around like this. It changed its trajectory and headed in that direction [indicating the direction with her hands].

The original BBC Video Report published by BBC Russian Service on July 23, 2014 has since been removed from the BBC archive.

In a bitter irony, The BBC is censoring its own news productions.

This is the BBC Report, still available on Youtube
It has now been blocked [March 8, 2016] once more by the BBC. It is called suppressing the evidence. 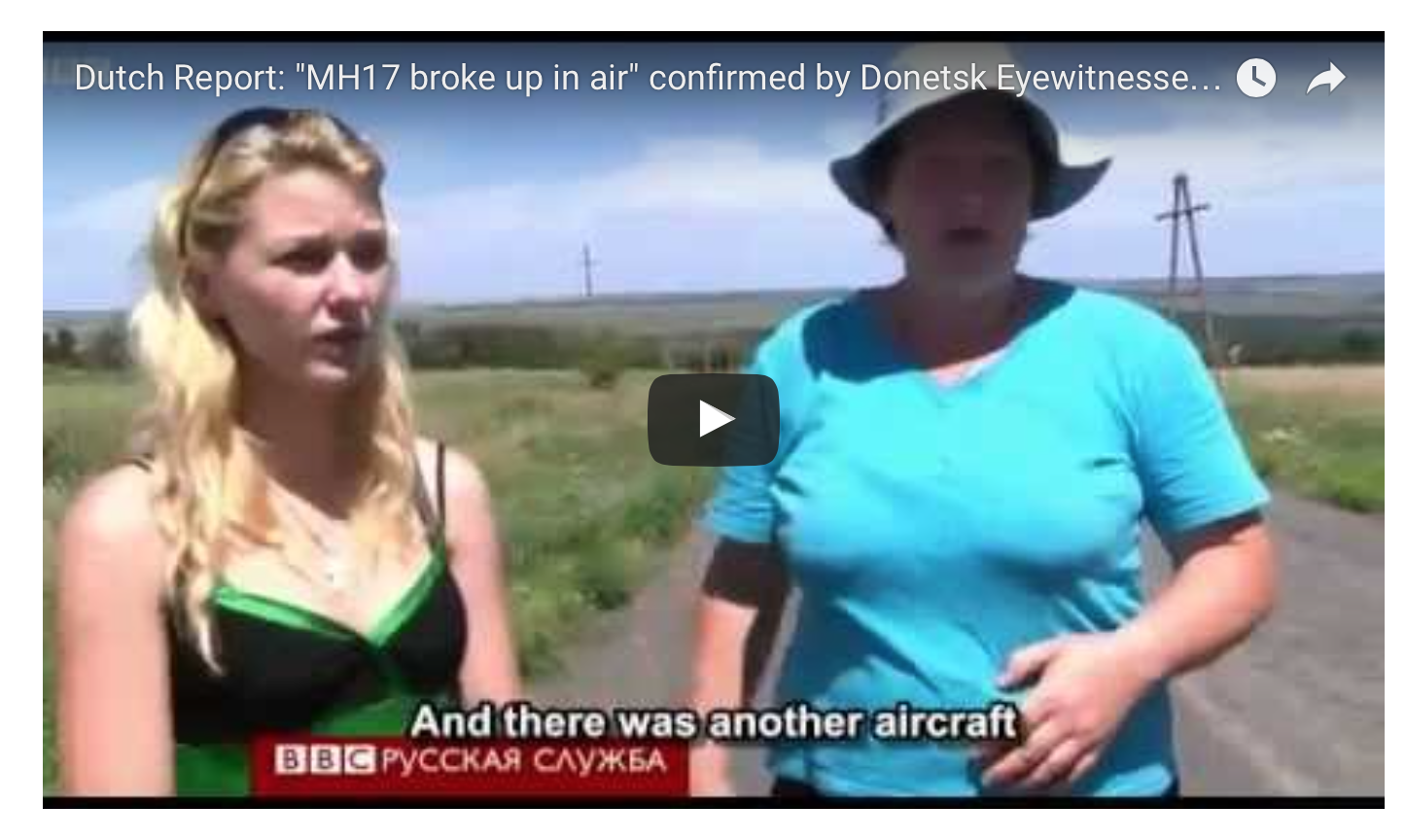 The media has reported that a surface to air missile was indeed fired and exploded before reaching its target.  It was not the missile that brought down the plane, it was the shrapnel resulting from the missile explosion (prior to reaching the plane) which punctured the plane and then led to a loss of pressure.

According to Ukraine’s National security spokesman Andriy Lysenko in a contradictory statement, the MH17 aircraft “suffered massive explosive decompression after being hit by a shrapnel missile.”  (See IBT, Australia)

In an utterly absurd report, the BBC quoting the official Ukraine statement  says that:

The downed Malaysia Airlines jet in eastern Ukraine suffered an explosive loss of pressure after it was punctured by shrapnel from a missile.

They say the information came from the plane’s flight data recorders, which are being analysed by British experts.

However, it remains unclear who fired a missile, with pro-Russia rebels and Ukraine blaming each other.

Many of the 298 people killed on board flight MH17 were from the Netherlands.

Dutch investigators leading the inquiry into the crash have refused to comment on the Ukrainian claims. 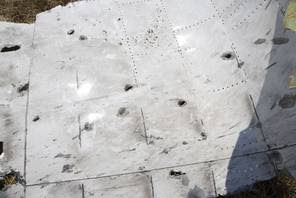 In this regard, the GSh-302 firing gun operated by an Su-25 is able to fire 3000 rpm which explains the numerous entry and exit holes.
According to the findings of Peter Haisenko:

If we now consider the armament of a typical SU 25 we learn this: It is equipped with a double-barreled 30-mm gun, type GSh-302 / AO-17A, equipped with: a 250 round magazine of anti-tank incendiary shells and splinter-explosive shells (dum-dum), arranged in alternating order. The cockpit of the MH 017 has evidently been fired at from both sides: the entry and exit holes are found on the same fragment of it’s cockpit segment (op cit)

The accusations directed against Russia including the sanctions regime imposed by Washington are based on a lie.

The evidence does not support the official US narrative to the effect that the MH17 was shot down by a BUK missile system operated by the DPR militia.

Revelations of German Pilot: Shocking Analysis of the “Shooting Down” of Malaysian MH17. “Aircraft Was Not Hit by a Missile” By Peter Haisenko, July 30, 2014