Sophia Wilansky, 21, was seriously injured after being hit by projectile when officers threw less-than-lethal weapons at demonstrators, her father said 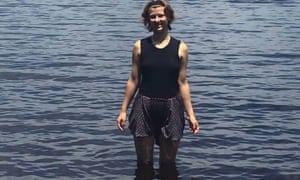 A 21-year-old woman was severely injured and may lose her arm after being hit by a projectile when North Dakota law enforcement officers turned a water cannon on Dakota Access pipeline protesters and threw “less-than-lethal” weapons, according to the woman’s father.

Sophia Wilansky was one of several hundred protesters injured during the standoff with police on Sunday on a bridge near the site where the pipeline is planned to cross under the Missouri river.

Graphic photographs of her injured arm with broken bones visible were circulated on social media.

“The best-case scenario is no pain and 10-20% functionality,” said Wayne Wilansky, Sophia’s father, who travelled to Minneapolis where his daughter underwent eight hours of surgery on Monday. He said his daughter had been hit by a concussion grenade thrown by a police officer and that the arteries, median nerve, muscle and bone in her left arm had been “blown away”.

Sophia will require additional surgery in the next few days and her arm may still have to be amputated, he added. “She’s devastated. She looks at her arm and she cries,” he said.

Sophia Wilansky is one of thousands of activists who have travelled to the Standing Rock Sioux reservation in North Dakota to attempt to halt the construction of the pipeline. Members of the

Standing Rock Sioux tribe established a “spiritual camp” on the banks of the Missouri in April. The tribe fears the pipeline will jeopardise their water supply and say that construction has disturbed sacred burial grounds.

The activists, who call themselves “water protectors”, have faced a heavily militarised police force. More than 400 protesters have been arrested by law enforcement officers who have deployed pepper spray, teargas, rubber bullets, Tasers, sound weapons and other “less-than-lethal” methods.

Following Sunday’s confrontation 26 protesters were taken to hospital and more than 300 injured, according to the Standing Rock Medic & Healer Council. Most of the injured had hypothermia after being hit by a water cannon in below-freezing weather.

The Morton County sheriff’s department did not immediately respond to inquiries from the Guardian. In an interview with the Los Angeles Times, a spokeswoman for the department denied the agency had deployed concussion grenades and suggested the injury may have occurred while protesters were “rigging up their own explosives”.

The Standing Rock Medic & Healer Council refuted law enforcement’s claims in a statement, citing eye-witness accounts of seeing police throw concussion grenades, “the lack of charring of flesh at the wound site” and “grenade pieces that have been removed from her arm in surgery and will be saved for legal proceedings”.

The incident on Sunday began when about 100 activists attempted to remove two burned trucks from the bridge just north of the main encampment. The bridge has been barricaded for several weeks, blocking the most direct route to Bismarck, North Dakota, and raising safety concerns among residents of the camp and the reservation.

The barricade may have exacerbated Wilansky’s injury, her father said, by delaying her arrival at a hospital in Bismarck. She was subsequently airlifted to another hospital in Minneapolis.

Wilansky has received a massive outpouring of support online. A crowdfunding campaign established to help pay her medical bills raised more than $120,000 (£96,000) from more than 4,000 donors in the first seven hours.

Friends of Wilansky are planning a prayer vigil in Minneapolis on Tuesday.

As Thanksgiving approaches, more than 100 Native Americans and their allies have just been attacked and injured by police in a new assault using rubber bullets, tear gas, mace canisters and water cannons in freezing temperature.


Videos show police spraying people with cold water in freezing weather which has led to mass hypothermia.
This is an emergency. Please sign the petition that is helping us bring attention to these outrages.
Please call the phone numbers on the page following the petition to demand a halt to this injustice.
Our petition to President Barack Obama, North Dakota Governor Jack Dalrymple, the Morton County Sheriff's Department, and the Army Corps of Engineers, reads:

Regarding Standing Rock, we urge you to remove the National Guard. Halt the provision of war weapons and war training to police departments. Demilitarize police actions at Standing Rock. Send Department of Justice observers. Deny the Army Corps of Engineers' permit for the Dakota Access Pipeline.
Click here to demand justice.
Let's not forget that the courageous water protectors at Standing Rock are protecting the climate of the earth we all need to live on.
Signing our names on to amplify their voices is the least we can do.
After signing the petition, please use the tools on the next webpage to share it with your friends and to make important phone calls.
This work is only possible with your financial support. Please chip in $3 now.
-- The RootsAction.org Team
P.S. RootsAction is an independent online force endorsed by Jim Hightower, Barbara Ehrenreich, Cornel West, Daniel Ellsberg, Glenn Greenwald, Naomi Klein, Bill Fletcher Jr., Laura Flanders, former U.S. Senator James Abourezk, Coleen Rowley, Frances Fox Piven, Lila Garrett, Phil Donahue, Sonali Kolhatkar, and many others.
Background:
> TYT Politics: Barbaric Dakota Access Oil Police Cause Mass Hypothermia
> Democracy Now: Standing Rock: 100+ Injured After Police Attack with Water Cannons, Rubber Bullets & Mace
> Associated Press: Police, Protesters Face off at Dakota Access Pipeline

The full truth about the Dakota pipeline

On this day where we supposedly give thanks for the Native Americans who saved the Pilgrims from freezing and starving to death...

Let's get some things straight about the Dakota pipeline:

1. The entire project is based o fraudulent permitting and Obama can shut it down with the stroke of a pen.

2. This pipeline was deemed "too dangerous" to run nearby Bismarck so it was moved to this area where it threatens the only fresh water supply in the region.

3. The entire Missouri River is put at risk by this poorly conceived project.

4. This pipeline is only economically because the 40+ year LAW forbidding the export of oil from the US was recently overturned.

5. We are trading the future of our fresh water supply for the chance for a few billionaires to make a killing by exporting US energy reserves that we should be retaining for ourselves.

Please share this widely so your friends, family and colleagues understand what's at stake and support the heroic effort thousands are making to stop it.

No water, no life and what's at stake in North Dakota

No water, no life.

It's a simple formula.

For example, did you now that Trump owns a $2 million stake in the pipeline?

Did you know this pipeline project is violating many existing laws and could be shut down with the stroke of a pen?
===========


Welcome to the police state

North Dakota...Oil companies want to put a pipeline under the Missouri River.

The people who live there want to stop it.

And out come the head crackers in blue.